You’d think after Overland Expo East that I would want to spend a weekend at home relaxing. You’d think, but you’d be wrong. Overland Expo is fun, but in a different sense. A very hard working, people everywhere sense.

For a loner and someone who enjoys seldom used roads and quiet nights OVEX tires me out to an extreme level.

I enjoy solitude, exploring, getting lost and finding dead ends. I love seeing all of my friends and smiling strangers at OVEX, but I long to getaway. I long for quiet and adventure. That’s why the week after OVEX East this year I was stir crazy. I was dreaming about quitting my office job and hitting the road. Some weeks I almost feel natural sitting in my office working away. Almost, but never fully. The week after OVEX I felt like someone who woke up one day with no memory how to be the person you are. I went into work and thought “How do I do this again. How do I pretend to be a business person successfully? I can’t remember right now...”

I needed to get away. So, on Friday night K and I headed out. We just wanted to explore some new dirt roads, get a bit lost and see what we found.

We hit dirt at Mt. Ord. The front road to this smallish mountain takes you up over 5,500 feet in elevation which was enough to feel some cool air, but something was still not right. The road, it was too nice. We saw a couple other trucks parked and camping so we had to go further. On the backside was a smaller disused track I’d heard about. The back way down the mountain to an old mine.

After crossing some wash outs that would eat up a small SUV we started to feel better. My heart rate slows when I hit dirt, even more so when I find a remote road with no tire tracks.

When you get to camp after sunset you never really know what you’re going to wake up to. I’ve woken up 50 yards from someones house in Baja before. It’s amazing what you can’t see or don’t expect to, at night.

Thankfully, we woke up to a great view and solitude.

Part of the joy of sleeping inside you vehicle with the doors open is that you instantly are in your surroundings. No zippers, flaps or other visual barriers to see the outside world. You open your eyes and are greeted to your view of TODAY.

After some eggs and bacon (you have to have bacon camping!) we headed further down the ever degrading back road. We stopped on one of the many washouts and water bars to grab a couple photos of Goose doing his thing. 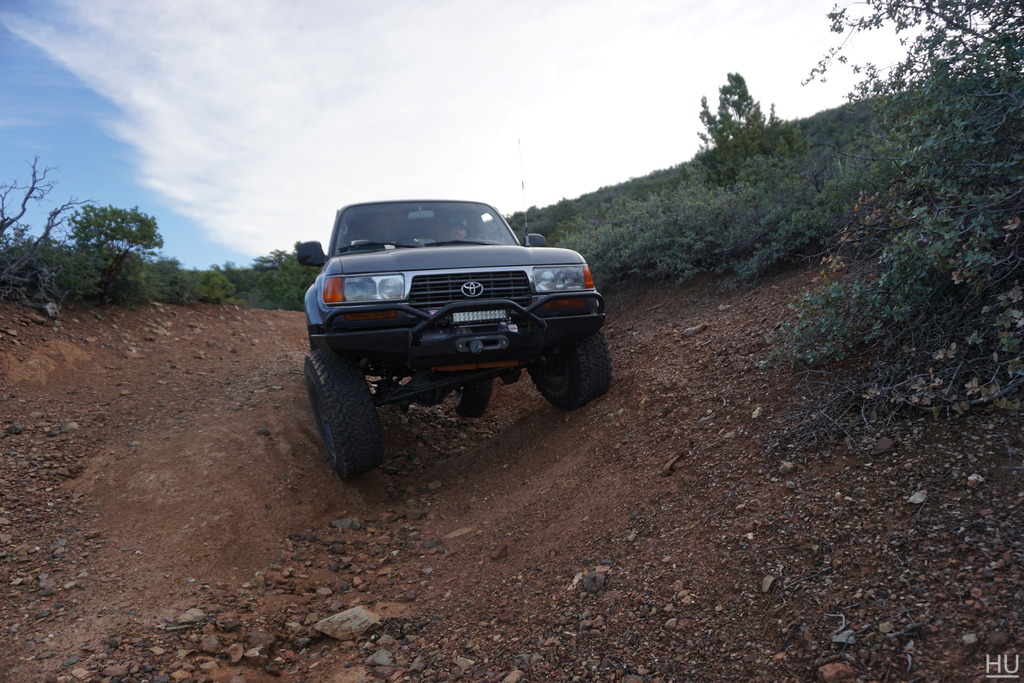 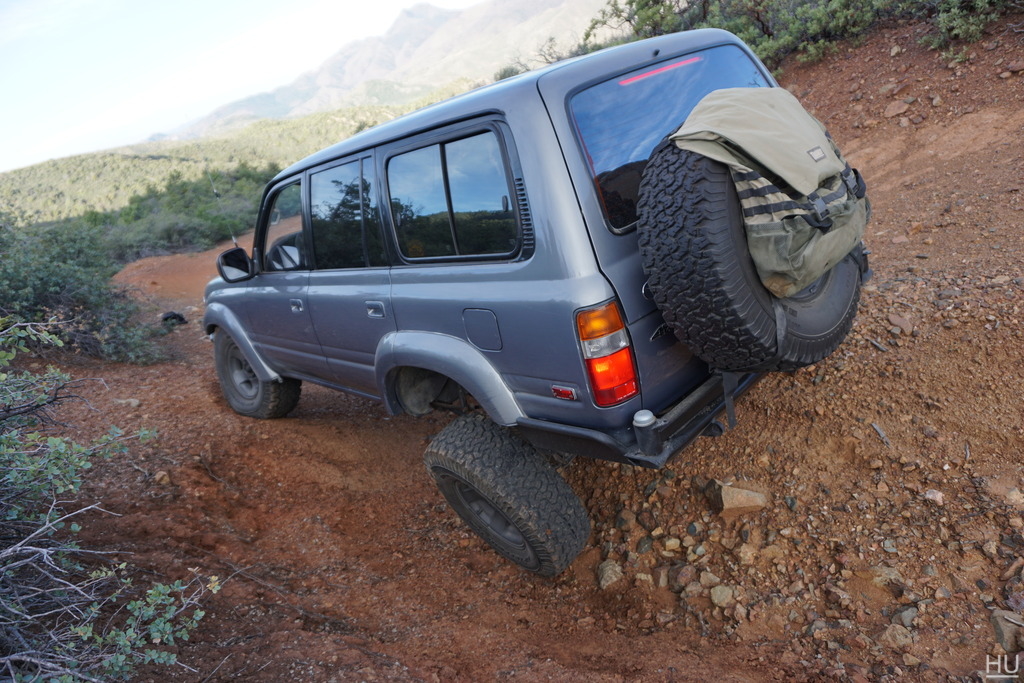 We ran into some hunters at the bottom of the road on quads. “Where are you guys coming from? Where does this road go to?” Those are the kind of questions I like to hear because it means that a road is still fairly unknown if hunters don’t know about it.

After hitting tarmac we headed up to Payson, AZ and then right back to dirt on a little back-road I know to bypass the town. Up and up we climbed until we were on the Mogollon Rim. (What we call this part of the edge of the giant Colorado Plateau)

Everyone who enjoys adventure should get a minor in geology. So many amazing formations in the world:

The busier area beneath the rim was smokey with camp fires.

The road ahead skirts this edge.

The closer you look at vistas the more you want to get out there and explore it. Hike canyons and find cliff dwellings.

We got to Woods Canyon Lake which has paved roads, “campsites” etc. It’s just about the last place I like to be, but thanks to a mountain bike ride I did with a local many years ago I knew that the trail leading to the backside of the lake was always nice and quiet. There was also some nesting Bald Eagles over there. So, we did a little jog around the lake stopping for a beer and sandwich mid run.

No bald eagles this time, so we escaped the crowded parking lot of the lake and started to explore some seldom used trails. We ended up near Apache Reservation where the road had waist high grass. That is a great sign that we’re on our kind of road. No one had been here in a while!

We took a side road that looked a little more used and ran into a local rancher with 10, yes ten, dogs following him. Nice fella, but wow that’s a lot of dogs. One of them had been attacked by a Javalina (A Peccary https://azgfdportal.az.gov/hunting/species/biggame/javelina )

They are fearless mean little suckers. The dog was cut wide open, but as you do when you live on a ranch, you take care of it yourself. The injured dog had staples holding it together and looked as happy as can be. The dog was more concerned with joining his brothers running behind the UTV, but was relegated to sit in the front seat.

Oddly, he didn’t have any sort of map so we showed him the trails and let him know which ones go through and which dead ends we’d hit. We filled their water bottles and headed out on our way.

Food? Do you have food?

Eventually after doing a full loop on one trail we finally found an old track that would take us south, towards Phoenix. The goal was to get onto a trail that would meander without any permanent dead ends until we reached Phoenix. After putting along we found a very faint side trail and made camp.

Right next to what we decided to call Hood Ornament Tree.

We sat around the fire and talked. The quiet was so absolute that I knew I had found what I was looking for. It’s like hitting the reset button on stress.

The following morning we woke up and started making breakfast, yes more eggs, bacon and green chili! As we were cooking we heard a UTV come speeding along. It drove up to within 20 feet of our camp and 2 hunters got out and started gearing up to go hunting. I stood there in front of my truck staring at them, wondering how long it would take them to see us. Eventually one looked over and his eyes grew big. He waved, they got back into the UTV and reversed very quickly running over some branches and almost running into a tree. We could hear the engine speed off down the forest road and then it was back to silence for breakfast.

We enjoyed driving the back road and seeing new views around every corner. Slowly descending into the desert. Eventually we started seeing signs of human development again and we begrudgingly admitted to ourselves that the trip was over. It was exactly what we needed to make it through another week, but we’d need another dose soon.

Previous: Dare to meet your heroes | Next: "Going Plaid..."