On the last full day of the trip we go hunting history. Arizona’s and my own.

So, when I first moved to Arizona I had no idea that any of my family had ever lived here. Had I paid attention to my parents I would have realized that my Grandma grew up here and her dad was the station master at the Grand Canyon, Ash Fork and Phoenix (Among others). So, when I finally got old enough to care, I started digging deeper. I wanted to visit places my family had and understand a little more about their life.

First things first, we still had to get back to AZ. We decided we’d drop down out of the mountains from Butts Point and drive through Blanding to hit some dirt roads again. We took dirt all the way to Mexican Hat, UT.

There is something about dirt roads. Were the views any better than the scenic highway nearby? I don’t know, but the experience and way you see those views is. No one in front of you, no one behind you, just cruising along at a speed not that different than if I was on pavement. We made good time, but it was already getting hot so we stopped at the San Juan river and cooled off.

The reservation dogs just kept barking and running back and forth on the other side of the river. Reservations are full of dogs, living and dead along the highway. It’s a sad thing to see, but at the moment we were happy we had a fast moving river between us.

We high tailed it out of there before the dogs found the nearby bridge and pulled off onto dirt again just outside the National Park limits along the south rim of the Grand Canyon.

This old ranch was slowly rotting away. What a location! I’m sure the life they lived was so hard that the novelty of being next to one of the great world wonders was long ago lost on them.

After our lunch stop we headed on towards a spot I’d been meaning to visit for years. The Hull Cabin. When my great grandparents were living at the train station they’d take day trips to go and visit this cabin which was fairly new at the time.

In all of these years, it looks like the only difference is that the trim was painted brown instead of the original white. You can rent this cabin from the Park Service and we intend to on a future trip:

It was neat to see the original white trim within the interior.

Just down the road were the old stables. The construction of this building was one that made you stand back in awe.

Talk about built to last a lifetime or three.

We decided to brave the crowds of the main Grand Canyon visitors area to match up some other spots from the family history album. The sheer amount of people is one thing, but the fact that almost 100% are on long family trips makes it even more interesting. We picked our way through the trundling cars and “hikers” walking the road and sometimes veering in front of the truck to get to the Train Station. Back when it was built the train was the only reasonable means of visiting the Grand Canyon. Wagon and horseback riding to it would take several times longer.

Some of it had certainly changed, but the station itself looked as if very little time had passed.

(My aunt playing in front of the station, not long after Arizona became a state)

Hmmm, that baggage cart looked familiar. It appears that the one sitting here today is a bit newer with a full steel frame and less wood or was the original just re-enforced?

(The disinterested people meandering around must have thought we were crazy walking around matching up photos.)

(Grandpa Wayland and Auntie Bidge (Where did they get these names from back then?!)

Nothing like playing next to the edge with your child, pre-railings.

(Is she wearing a child leash?)

We kept on our way and headed for Williams, AZ. We wanted to camp at high elevation because it was pretty hot even at 7,000 feet. Williams is a neat town. It was another railroad stop. The east/west line would and still does cut through town. Back in the day you’d hop on a separate train to head to the Grand Canyon, just as you do today.

I was looking to find roughly the spot where this was taken.

Not too bad. The odd staggering of round/square columns lined up pretty well.

So, we’d enjoyed chasing history, but the hours on tarmac had us itching to get back to dirt. (Footnote, if you ever get to Williams stop at the Canyon Club for a beer and ask the bar tender if you can go down into the underground tunnels. The town has tunnels leading all over. From the jail to the bar to the train tracks etc. The Chinese Rail-workers built most of these and lived down there. Sad, but true)

Williams has a small ski resort, yes I find that odd too, so we headed that direction in search of cooler weather. On the backside of the ski hill we found a small UTV/ATV trail and kept following it as we climbed. One section was downright steep! I had a hard time picturing an ATV making it! The good part was that once at the top it was a dead end with a fantastic view of the surrounding countryside.

(So many different kinds of mud. Utah Mountains, Desert, Northern AZ and who knows what else.)

We were determined to take our time to get home in the morning.

We decided to stick to dirt as long as possible and made it from Williams to Jerome. In part we retraced the old railroad route and enjoyed prolonging the adventure just a bit longer. 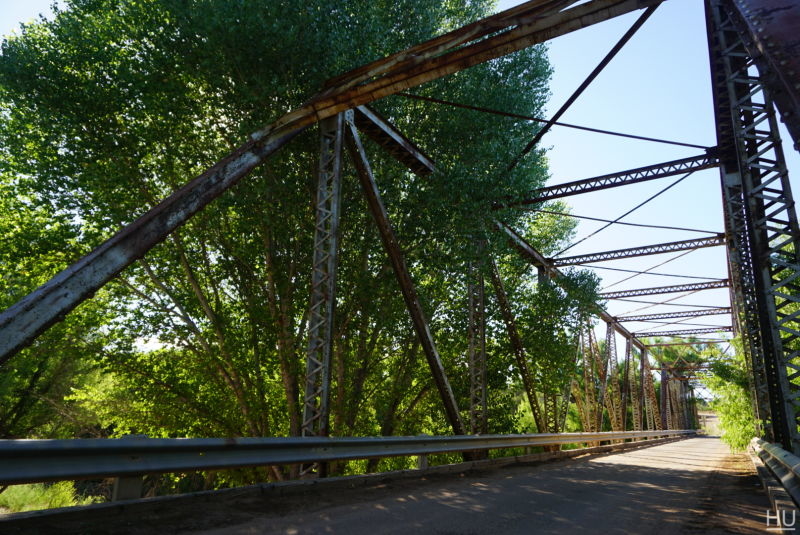 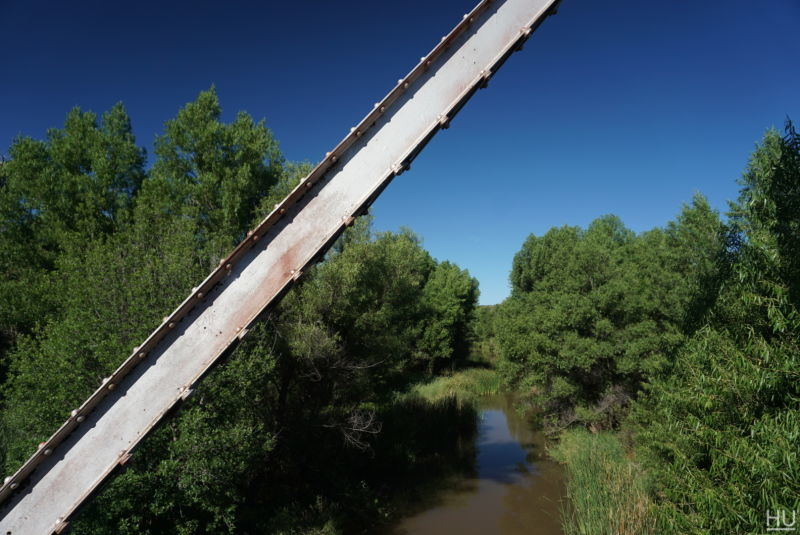 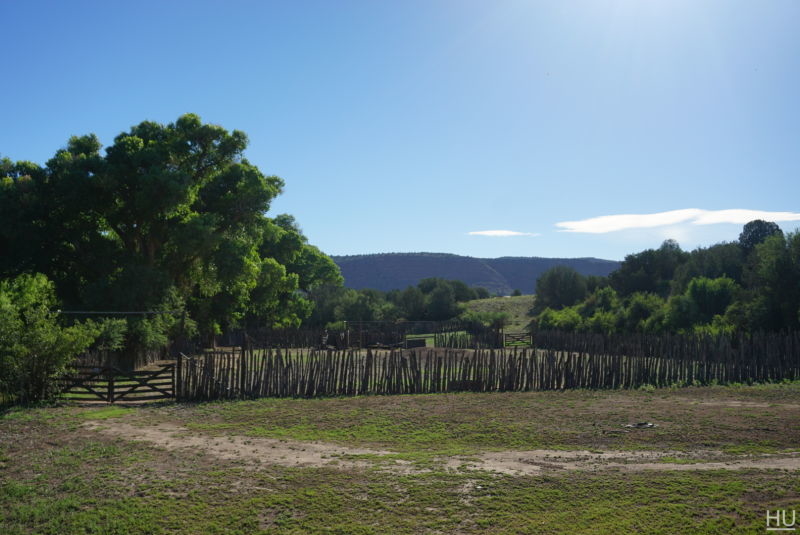 Just before hitting pavement, we dropped into an old ghost town/car museum that’s housed within an old mine. This old timer has been collecting cars, trucks, motorcycles and tools for decades. As the boom and bust would hit Jerome, this guy has been buying up or taking discarded items for years. Sadly, it was too early in the morning and so we just took a couple pics from the outside. 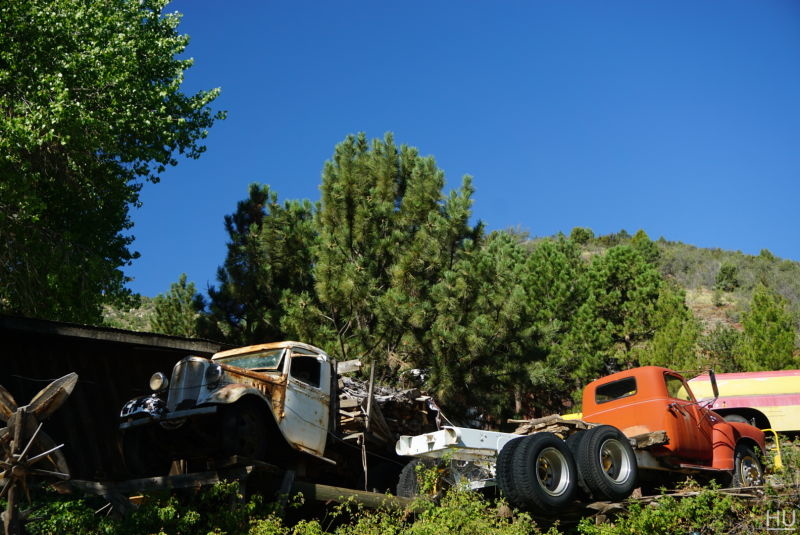 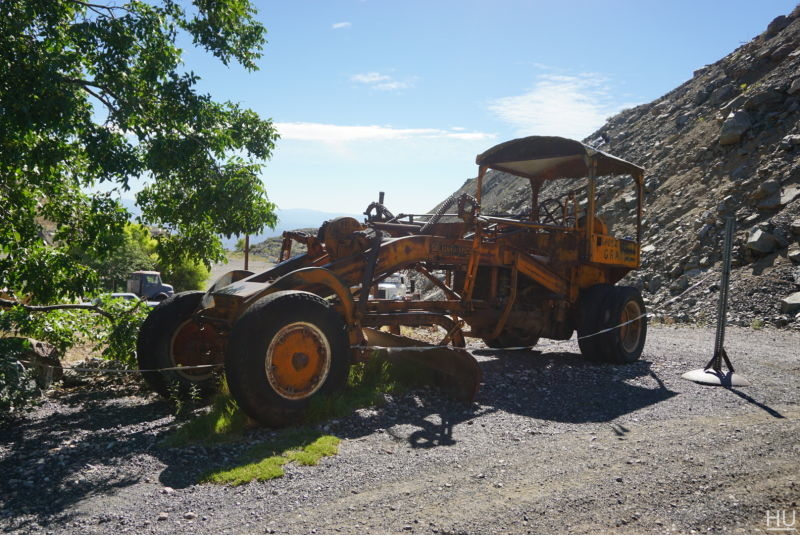 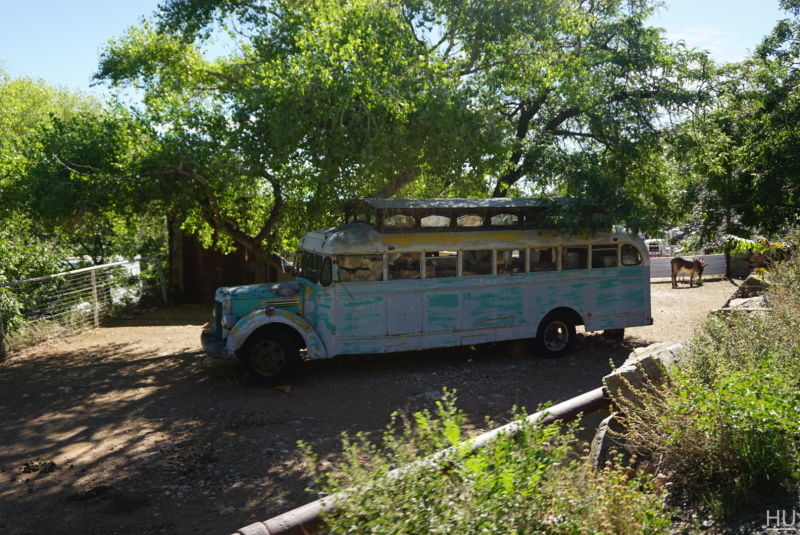 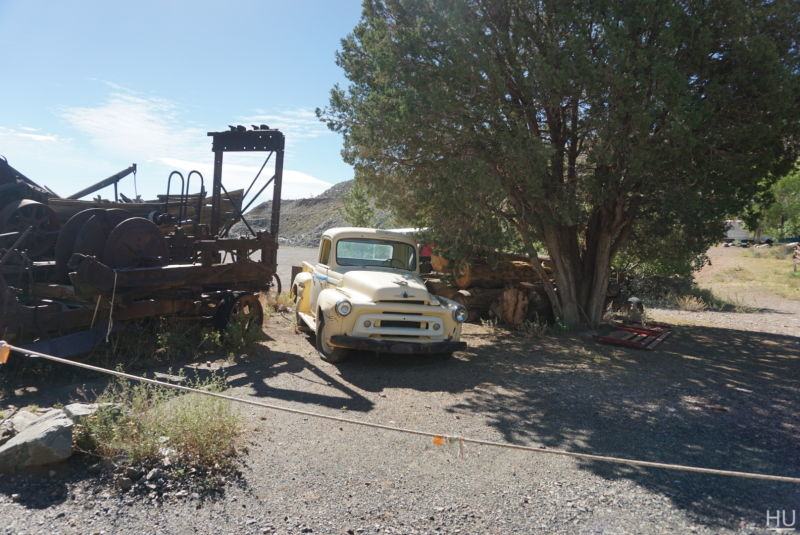 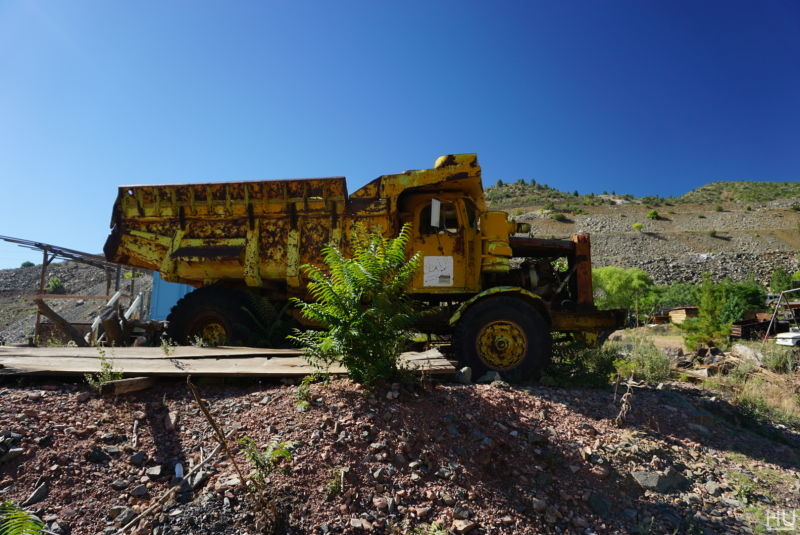 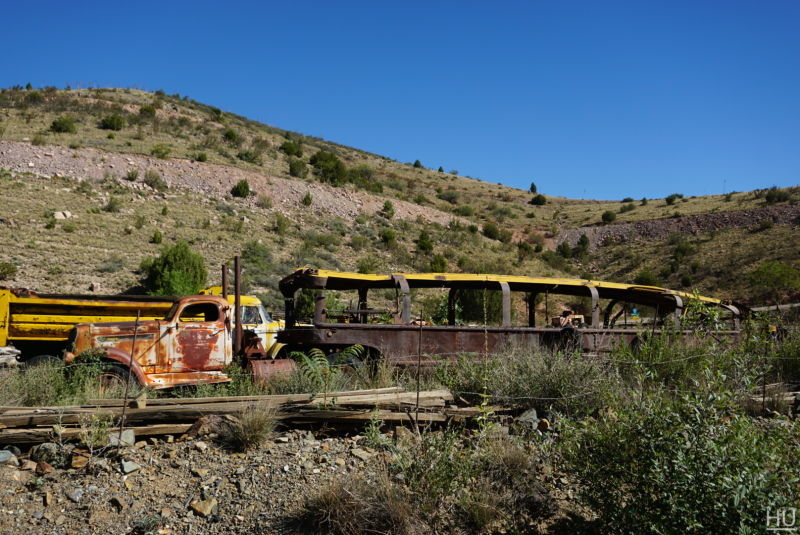 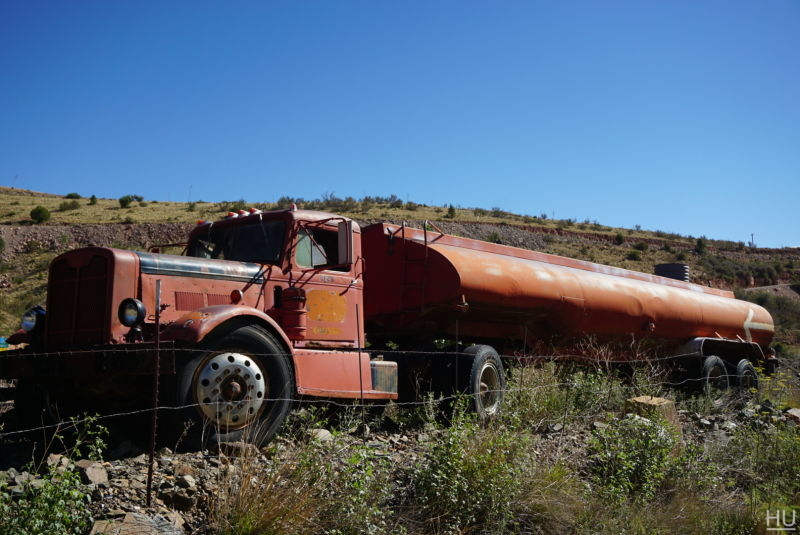 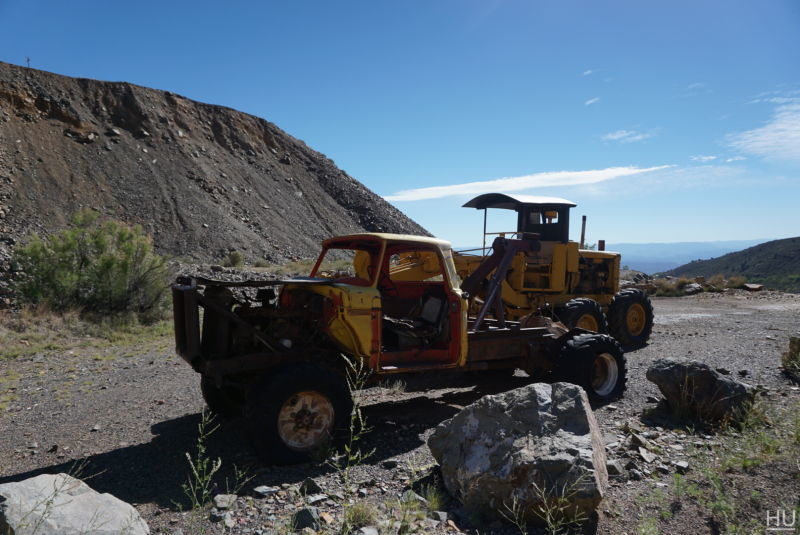 As we were climbing up to and past Jerome the check engine light came on. I pulled the code and it was for the Catalytic converter. I decided to check the oil again since after the engine rebuild it seems to have been using some oil. Sure enough the oil was at the low mark so we added a half quart. Between the oil being burnt and the expensive Catalytic converters needing replacing it was a bummer moment. We decided that the only thing we could do would be to enjoy the cruise back to Phoenix and immediately start pouring over the many pictures from our trip.

We spent the evening remembering all of the amazing sights we’d seen and lucky camp sites we’d found. We already wanted to be back! We decided that on a future trip we’d have to try and match up some other old family photos. After all, who doesn’t want to find the spot where your Aunt posed with a dead mountain lion...

Previous: Redrocks and Aspen Trees - UTAH - Day 4 | Next: Taking a chance on an old truck.